After a bit of time off due to a combination of workload and the plague, I’m back with a few more recommendations.

I won’t hide it – I’m a fan of Roxane Gay’s work. Ever since I was directed to read Bad Feminist, I’ve always made time to read her work (including her amazing run on Marvel’s World of Wakanda series, alongside Ta-Nehisi Coates’s Black Panther series) . So when it was announced that a collection of her short stories was going to be released, I picked up a copy as soon as it came out.

The collection of twenty stories focuses on women that aren’t difficult themselves: rather, they endure difficult men that harass and abuse them. The title sets up the vein of sarcasm that Gay carries through her collection and how she builds her protagonists and how they’re stereotyped. Each of them are uniquely resilient, driven by their own agency and identities to survive the men in their way – be it the sisters who take in their alcoholic abusive father, or the structural engineer harassed by a colleague. Gay is on top form here – bitingly funny and incredibly perceptive. As ever, when she speaks, you should listen. 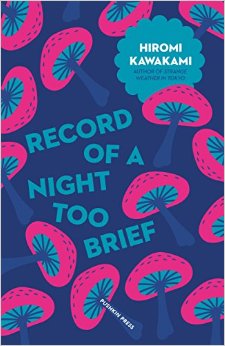 Occasional readers may remember that I reviewed Kawakami’s The Nakano Thrift Shop last year. Pushkin Press have published a trilogy of Kawakami’s short stories, and if you’re expecting something similar to that work, you’re in for a surprise. This is one of the strangest collections I’ve read in quite some time, and that’s saying something.

It’s hard to discuss much of the content of the three stories in Kawakami’s latest release without ruining them. ‘Record of a Night Too Brief’ follows a woman as she travels through the night with her porcelain girlfriend, encountering what can only be described as a most surreal menagerie. ‘Missing’ turns to watch how a sister mourns a lost brother who is visible only to her, and how her family welcome his would-be wife into their home. ‘A Snake Stepped On’ tops all of this in terms of bizarre pitches. A woman treads on a snake one morning. She comes home that evening … and realises the snake has moved into her house and is saying she is her mother. I’m not exaggerating about any of these.

If you enjoyed The Nakano Thrift Shop, I’d suggest giving this a look. Kawakami’s gift for depicting the fantastical within the benign is once more on display here, and it’s a great way to spend an afternoon. It’s certainly a unique release at this point of the year, given how it’ll likely leave you staring at it in wonderment once you’ve finished it.

One thought on “Recommended Reading: January 2017”

I'm Josh, The Sleepless Editor. After years of working in the publishing industry, I now also review books and search for new and interesting authors, offering concise, clear opinions on everything from the latest releases to cult classics.

These efforts are helped by vast amounts of caffeine.

I finally get to start reading @zenaldehyde’s ‘The True Queen’ today - been looking forward to this ever since I finished reading ‘Sorcerer to the Crown’!
Tonight the Cat-billed Fattypuss waits intensely, set in turret mode, for one thing only: Xmas Biscuits.
The Cat-billed Fattypuss cares not for how many shopping days remain until Xmas - he only cares that you have brought him biscuits.
%d bloggers like this: